The train’s slower, more ragged pace woke me. Outside my murky window, an illuminated monument pointed toward the night sky. “Washington,” I thought, “a twenty-minute layover.” I stashed my bags under the seat and ran from the underground platform up to the station to telephone my brother, to tell him that an early spring snowstorm in Boston had delayed my train to Savannah, that I would be arriving late to see him and the rest of my family for the very first time.

Lateness frightened me; I was already too late to see my mother, who had been dead for a year, who had given me up thirty-three years before, when I was an infant and she was fifteen.

I ran back down to the platform, but my train had vanished as if this meeting with my birth family had been a pipe dream. Back up in the station, I discovered this stop was Baltimore (home of another illuminated monument), and my train had paused only to discharge old passengers and take on new ones before chugging off. “I’ll bet you see people thinking this is D.C all the time,” I said to the Baltimore stationmaster, a compact, wiry man who was welded into his uniform. He didn’t stop looking through schedules for a way to reunite me with my train and my belongings, and he didn’t look at me, but said “Lady, I have never seen this happen before.”

Thanks to the deadpan stationmaster, I caught up with my train in D.C., breathless at my near miss. “You’ll never believe what just happened,” I said, spilling my story to my seatmate, a businessman with a briefcase on his knees. He yawned. Another person bored by my drama.

The train pushed south through the night into a late March dawn, and the vegetation alongside the tracks grew increasingly green, increasingly intertwined. I scanned each town for southern place names all the way to Charleston, South Carolina, and my breath sputtered as we crossed the Savannah River into the place I am from. A Southern girl, raised in the North, with a lifelong hankering for soft evening air.

The train station where my family waited for me was shabby by Northern standards, an open platform built from concrete, a single story building for tickets and for waiting. A group of small people stood huddled close together on the platform where the trains’ first car stopped. My sister—I knew it was her from the photos they had sent—stood with a cigarette spiking up from one petite hand, her shoulders seemingly weighed down by the fringe on her suede jacket.

I had been writing letters and talking on the telephone with my five brothers and my sister, my two aunts, my uncle, for about a month before I arrived in Savannah. I was ready to love them, but I was not ready for the sensation of my sister’s small hand in my small hand, for seeing my own eyes staring out from my brother’s face. I was not ready for their exclamations—just like Momma’s—over my hair, my eyes, my hands, my feet.

When I found them, I found the difference between being loved by people who bring you into their lives and being loved by people into whose lives you have been born. In some ways, it’s as simple as the difference between thinking about what you have in common with others and experiencing, through your five senses, what you have in common. For my family, even when time and distance separates us, even when we betray or disappoint one another, we come back to the flesh and blood we have in common. 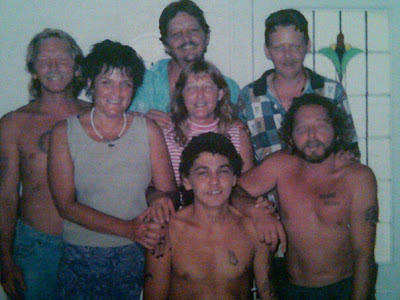 Michele and her siblings, 1997

I had felt like an outsider all of my life until I got off of that train in Savannah. Today, I am a woman stretched: one foot in the North, one in the South, one hand holding onto my birth family, one hand holding on to the life I had before I met them, one eye on the outside and one eye on the inside. The stretching makes me ready for the poetry.

“The glass transition is a complex phenomenon burdened with many substantial misunderstandings.”
-Professor Ernst-Joachim Donth

The chapel’s antique windows ripple like
translucent skin in flux to too much time
and gravity. Illusion. Those panes
gave up the flowing ways of molten sand
as soon as they survived the glass transition.
I hold my hand above the votive candle.
The glow shines through the webbing of my palm,
my fingertips, the same warm light I saw
before my birth, the skin of mother’s belly
stretched beyond all reason, fleshy lens
to shelter me from too much clarity.
She gave me up, and so that light was all
I’d ever see of her, a girl re-shaped
into a vessel for the crucible,
ready to receive the artist’s breath
exhaled into her own still-molten dust.
My infant grief rushed wet, unthinking from
her fiery womb, and after fifty years,
my flesh still craves her touch. Her sisters tell
me how she yearned for love and shrank from rage,
and how her curves were praised by men, and how
she drank and spilled her secrets, how she raised
her other children up like offerings
both precious and expendable, and how
she gave them up or lost them as she passed
through fire, and still she held what breath she had
to share with them, when they could find her, until
she shattered in her hardening.

Michele Leavitt is a high school dropout, former trial attorney and hepatitis C survivor. She is the winner of the Ohio State University’s 2010 William Allen Award for creative nonfiction. In 2010, her poems and prose appeared in The Humanist, Dogwood, The Journal, Mezzo Cammin, Passager and The Platte Valley Review. A chapbook, The Glass Transition, was also published in 2010. Michele earned a law degree from Suffolk Law School in 1981, a Master of Arts in English Literature from Salem State College in 1989, and an M.F.A. in Creative Writing from Vermont College in 1995. She lives in Moscow, Idaho, where she teaches in the University of Idaho’s English Department.

Wonderful, Michele; thank you! And of course I "get it" completely.

Michele, A Sister I so cherrish everday and wish I could touch with a special hug everyday; for the far-away miles hold us apart but my heart is always filled with Love that is untouchable! Thanks,so very much for the Breath of your Written Words!

Lovely image of the glass/womb, and sorry your mother died before you could meet her. Great bunch of brothers and sister!

An essay about Michele's adoption experience has just been published in Medium's Human Parts. You can read it by going to this link: