My son Ismael is only 3 ½ and while in some ways very able to articulate himself, he is not so yet adept at articulating his own “story,” and to be frank, I’m not quite adept yet either. Maybe because our story is also political in that we are a transracial family, but with a twist, in that my son, while a domestic adoption, has a birthmother from other colonized and colonizing countries and, because of my connection to the colonizing country, she chose us. But of course that choice reverberates within larger histories of what is, for us, three continents and languages. Or maybe I don’t even want there to be a story, but an ongoing. I know that in ways there has to be a story because while most people we’ve met have been “polite,” meaning that they haven’t interrogated us, that’s not always going to be so, so it will be good to be prepared. I often forget that we look different from each other; I’ll wonder why someone is staring and then I’ll remember, oh yeah. I know I am not supposed to be colorblind, but sometimes in the intensity of parenting, I’ll forget and then I hope my forgetfulness is not colorblindness. Sometimes I’ll even find it funny, to be the one to rise from the bench in the playground to go to Ismael after he’s tumbled off his scooter or needs a snack or something, and see the covert shock in the faces of other parents and caregivers. Mostly it’s been “he’s so cute, he’s so cute,” but we’re assured in various adoption books and journals that will change—in the U.S. and in NYC, as his height and weight increase, he will become that threatening male of color, pulled over if he’s driving, asked for ID and questioned if he’s standing around waiting for a friend, watched by store managers if he’s shopping, and so on. And somehow I, a white woman, will have to find the tools to teach him about these things. I too have to learn to live with that terrible anger and fear for the extreme vulnerability of the young black male. (I think of the son of Akilah Oliver’s.)

I recently contributed to Claudia Rankine’s Open Letter on Race and the Imagination, where I wrote, “There is a blog by an adult adoptee, titled ‘Harlow’s Monkey,’ after the felt-covered chicken wire that functioned as a less-than-pathetic substitute for a mother in a scientific study on mother-child bonding. As a white mother to a black son, I often feel like that chicken wire covered with felt, a poor substitute for the black mother who would really be able to teach her son what being black in America—or the world—is all about.” At the same time, I am selfishly happy to have had my world opened, to learn how not to be a stunted citizen half-blind to the reality of life and lives in the United States—I have a new and active negotiation with neighbors, citizens, the city, life. And of course language. To be led by a child into these amazing worlds and words. I am reading poets from “other” (other than mine) cultures and perspectives. I am not as interested in hermeticism. I am more interested in worldliness and activism. My time and culture has changed—people talk about “the night before” adoption, where you are one person or two people, and then the next morning, three. And with that three, many. We are in the tripod form of a “nuclear family,” but adoption has made us larger, more of a familial community with responsibilities and connections beyond ourselves. And that change, and those connections, reverberate also along lines of language. 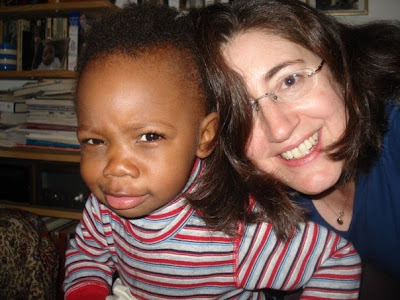 As the highway surrounds us so does traffic sound surround and so I am surrounded by husband care husbanding us both me and son now sleeping so he was a surprise and husbanded we sleep as wind carries sound surrounding us wind carries through the window and even the protective gate and screen—there are three layers to our window: screen, glass, and gate, as there are three of us, a tripod construction of family or as my son’s history and my history say: famille. My husband might be French or he might be German or he might be Italian or he might be Native American or he might be Blackfoot or he might be pied noirs. Not like me, French, and not like my son, French, not like my son, African, and not like my son or me, now New Yorker, now African American. Like all of us New Yorker African American French Native American. Whatever we are we will be confused and so will everyone who speaks to us and whether the traffic sound highway wakes us up filtering and the people speaking outside and the telephone and the beeping and honking and bicycle chain dragging and the small indefinable noise that wakes us up as the city surrounds us as people around us as we husbanded wake as we enter the wake of surroundings.


Excerpt from “The Shaking Frame”


What time will spacetime be in another hour when
I go back and pick up and cook and bathe
read three stories and tuck in and stroke head and give sip of water
sit within view, talking a little yet not so much as to promote
wakefulness but to be there, just be there, just be, be, a mostly quiet
presence and hopefully protective, or at least the sense

that one won’t disappear into a hole or turn into a statue.
A complete guide to the laws of the universe. Another long one.
Then night. Then night. He notices rain and darkness.
And sunny no rain why? Home makes him happy and
school makes him happy. We walk from one to the other
and back and my feet are wheels and I drowse while walking.
We are migratory and cross vast distances under trees
shifting colors, each street lined with trees is a tunnel
from which we emerge, the city goes on and on, and
landmarks I greet each day in strange familiarity like I know
the building that lights up and fades as clouds obscure sun.
It glimmers fiercely, chrome torching, a shape in color.

We are two, a pair, and four eyes, four ears, digits
and tendons and displacement at night stroke head and wait, bear
is wrapped like a burrito and cave made out of blankets and bear
shakes free, humidifier, trains, tiny cars, blankets hung neatly,
basket of socks, tiger puzzle. Culmination of grammar expresses
interior ecstatic communion—do self by self on own alone

Orion stays low in the sky and if we reside within his spur, still a long
way from his belt and here to there.

A tempest occurred and within that noisy space
small cars tossed across floor to be tripped upon
crayons and puzzle pieces—separated from one another.
Poor lion. Poor pig. Dolphin, cat, sheep, octopus—
taken from the sea and farm to be mixed in a horror
of plastic painted eyes and barely anthropocentric form.
Only to escape under the couch and be taken by pen elves.

Flux of dependent and independent, do
self, by self          learning self.
To turn to yell, questing voice, sound will carry—carry? Carry!
A sonar interested in discovering others, Tu, tu, you, who? At
all times, where are you? Needed in that place, always.

Tu tu intimate space occurs from here to there, within which
small space interacts as skin-to-skin of which where with
—with you, I with—them, of, small, from, small complex
being, configured, mixed and made, how to say to
how to glimpse tiny distances as in building to street, blankie
to sleep, pinky to lips, nails to fingers, eyes, mouth, scale
induces smallness
embraceable infinity

tu           I had thought
rewritten in
exquisite other
language.

Marcella Durand is the author of AREA (Belladonna Books, 2008) and Traffic & Weather (Futurepoem Books, 2008). A collaboration with poet Tina Darragh, Deep Eco Pre, is available as a PDF from Little Red Leaves at http://littleredleaves.com/ebooks/dep.html. She is currently working on a new collection of poems, tentatively titled An Alternative Energy, and translating a book of poetry by French poet Michele Metail titled La Route de Cinq Pieds/The Route of Five Steps. She lives in New York City with her family, where she works as a writer and editor.

Marcella,
After releasing the issue, I went to read Akilah Oliver's _A Toast in the House of Friends_ (Coffee House) which has poems about her son. Such a moving book ...

What a brave blog! You're so smart for articulating that which seems impossible to articulate.

A Dine activist once said, "All a people ever are is a set of patterns." She meant trauma patterns, essentially. I don't know why I find this powerful, from the mouth of a writer, a woman, a first nations woman. So perhaps it is important to have exposure to one's people's patterns.

I'm sharing a story, now. I take the bus home every night. I work in a sketchy building at the edge of Denver. Felons are employed upstairs from me to do sales calls. I work with Domestic Violence survivors, who may have violent perpetrators. I am a woman who is aware of danger, every night.

Last night, I am making my way through an empty parking lot towards a bus stop at the corner of the block, as I do every night. Everything is quiet behind the Burger King, Taco Bell and Seven Eleven. I spot the bus stop shelter and it's empty. I look in my bag, check my phone, look at traffic. I'm almost at the bus stop and look up. Company. A huge Black man is making his way to the shelter too. As a woman I've got to notice the degree of danger, assess it quickly and remember to be sensible. In about 10 seconds I know that he's not going to be a problem. Mostly because I can outrun him. But also there's the extreme chattiness. By the time the bus gets there, he's basically summarized the last 7 years of his life (he's a Gemini). I make sure to tell him he's not letting me, the lady, get on first. I will not accept it, as a feminist. He acquiesces. I'm surprised to find a stranger that is this friendly and chatty at my bus stop at 9:30 at night. Before we get on he says, "I got scared when you came up to the bus stop. I thought you was gonna do something." Shocked, "Me? How tall are you?" "I'm 6'5"" I say, "How were you scared of me being 6'5" when I'm only 5'6"?" He says, "I know but you had your hood up and I don't know, you could have had a weapon or something..." I did have my hood up. I'm cold when most people are perfectly comfortable with the temperature. Irony.

I also don't know why that seemed worth something.

Ismael is very cute. I hope the world is kind to him but as a Latina, I can say I know better than that. So what I hope for all three of you is love. Loving people around you who have your back when the rest of the world seems like a racist pool of imbeciles. Ugh!

Dear Marcella
I loved reading this - both prose and poetry - how it should be, how it can be!
I love the way you incorporate some of Ismael's language into your poem and articulate around it.