I never thought about this being my story, it has always been my secret. I have been extremely selective about who I share it with over the years. I am an Army brat and my story starts on an Army base in Germany. Being 20 years old, still living at home and being in Germany was a blast! I had a part time job for extra money, gave my parents $75 a month and had the freedom to do as I pleased within reason. I was a partier. Out every night with my friends just enjoying life as a young adult.

I met Larry at the NCO club and thought he was cute, a rocker with an army cut. We hit it off, fell in love, got engaged, then found out I was pregnant. It's ok he told me, we were going to get married and everything was going to be ok. He was from California and I was from Florida. He was about to get out of the army and go back to California, so I packed all my childhood in boxes and he sent them with his things back to his sister's home.

He left Germany when I was 4 months pregnant and I left when I was 5 months pregnant. I did not however go to California. Once he got home and out of the army he decided to start drinking more and doing drugs with his buddies because this was cool and the far away pregnant fiance was not. We did talk on the phone but he never sounded excited anymore about getting us back together. When I finally realized I was on my own I panicked.

My dad had just retired from the army and he and my step-mom were trying to adjust and get their lives together and find jobs. They said they would help as much as they could, but I knew it was a struggle for them as well. I saw ads in the paper for adoption agencies and so I called just to get information. My uncle asked to adopt my child but as much as I would have loved to give him and his wife the child they had been wanting, I thought it would be too hard for me knowing where she was.

When I called and told Larry I was thinking about adoption, he told me, "Do what you gotta do". So I did. When I told my mom about my decision she told me to have the baby in Texas and she would raise her. Again, I had to say no. I called the adoption lady again and they sent out a worker who explained the process and gave me a lot of paperwork to look over. Once I was sure it was what I was going to do, they found me an apartment, paid my bills furnished the apartment and gave me vouchers for food and clothing.

My dad and step-mom supported me as much as they could. This was hard for them as she would be their first grandchild. I was so worried about being a burden to them that I never realized that had I chose to keep her, we would have found a way to make it work. I am that person that worries about what other people think and how things will affect them before I worry about myself. But that was not my reason for placing her. I was scared that we would be stuck on government assistance and I wouldn't be able to give her anything other than low income housing and food stamps. I had also never been out on my own for more then 3 months and I had made a mess of that real quick and ended up back with my dad. I had very low self esteem and belief in my own ability to be what she needed.

The agency brought me a stack of papers with bios of perspective parents. I got about halfway through and found "the ones" They had been married for 13 years and had not been able to have children. They were Christians. They had a summer house. They had a dog. They were perfect. They were THE ONES. I called my worker and told her. She told me not to rush into anything, she had tons more of these bios if I wanted to look, but I was sure this was it.

I found myself in the hospital having a baby on 2/18/94. Once she was born I counted her fingers and toes, I fed her, I changed her diapers. I was her mommy for 2 days. My grandma came and rocked her and loved her. My dad and step-mom came and fed and rocked her and loved her. I named her Sarah Joanne. Sarah after my step-mom's mom and Joanne because I thought "Sarah Jo" was cute. 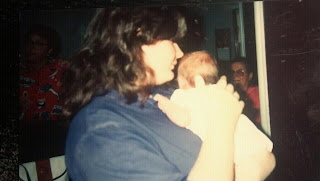 I had to stay in the hospital for a day longer then she did and that was the worst day of my life. The adoptive parents were out of state and they wouldn't be able to get there for a couple of days, so SJ was placed in a foster home type of situation the agency had. I on the other hand stayed in the hospital one more day then went home. I never knew a person could cry so much. The pain that I felt going home empty handed was so many million times worse than the pain of labor. I thought I was going to die. I think I lay in bed for the next two days, I really don't remember. I just remember crying until the tears ran out, then crying til it hurt too bad, and then crying even more.

Two days later I went to the agency to place my baby into the arms of her mommy and daddy. I had only spoken to them once and had never met them. The first thing I did was hold SJ and put her in a new dress I had bought her before she was born. I kissed her checked her toes again and told her how much I loved her. Then I went into a small sitting room to talk to her parents. They were such nice people and that made me feel good. We discussed the "semi-openness" of this adoption. I was to get letters and pictures for the first year and that was it.

The time had come to do the honors. I walked out to get SJ as they had not yet seen her. When I came back in with her, the smiles on their faces will be forever imprinted on my heart. Daddy had an ear to ear that would make a boston terrier look like it was frowning. My tears were no longer lonely, theirs were flowing down their cheeks as well. I cannot express what feelings were coming over me at that moment. In one room were the happiest and saddest people in the whole world. We all sat back down and talked for just a few more minutes but it got to be too much for me and I jumped up and ran from the room. Daddy came looking for me. He didn't have the heart to just leave without reassuring me that she was going to be ok. As they prepared to go all I could say was please take care of her. And they promised me they would.

I received the pictures and letters like clockwork for the first year and I have heard nothing since then. After they adopted her they received news that they could adopt a little boy from Russia. He was just a little bit younger then she was and they even sent me pictures with him and her. I devoured the letters written as if SJ was writing them and signed "Aimee". I stared at the pictures for hours and cried. In April, 2 months after having SJ I went to an army recruiter and signed up on the delayed entry program. I still had to lose weight before I could join the army. In October that year I left for basic training. My letters were still coming and while in Military Police school, my daughter turned one year old.

The raw pain passed but the throbbing whole in my heart remains. I hope to one day reunite with my SJ and see her and my other three children get to know each other. For now I can only live on the faith that daddy did as he promised me and took care of my baby girl. This is my secret and reliving it here on this page has opened it all back up. I had been keeping it protected deep inside for a long time, but I think it is time to share it and let it heal more. Thank you for reading if you made it this far. I am sorry it was so long. Believe me, it could have been much longer!

***
HOW HAS THE ADOPTION EXPERIENCE AFFECTED YOUR POETRY?
I am a birthmother. My daughter turned 18 this past February. I received pictures and letters for one year [after her adoption as a baby] and nothing since. I stopped writing poetry after my daughter was born. I have recently been able to open up a little about my experience with an online group for birthmothers I found. I am hoping to one day reunite with my daughter.

My mouth but not my laughter,
My eyes but not my tears,
I cannot gaze upon your face,
or chase away your fears.

My arms but not my hug,
My hands but not to hold,
I cannot feel you close to me,
or shield you from the cold.

My legs but not my journey,
My heart but not my song,
I cannot change the choice I made,
or know if I was wrong.

ABOUT THE POET:
My name is Danni Ingle. I was an Army Brat so I moved around all my life. After my relinquishment I joined the army and spent 3 years in Hawaii.  I now live in a small town in Oklahoma with my 3 parented children, 4 horses, 2 donkeys, 5 dogs, 2 cats, a cockatoo and my husband. I hope some day to reunite with my daughter or at least find out if she is ok and happy.