I'm passionate about advocating for orphans through Kidsave, and our family is in the process of adopting an amazing 11-year-old boy from Colombia, Jhonathan, who we hosted this past summer. Kidsave is an orphan advocacy organization that focuses on older children ("older" being defined in this context as 7 years or more). They have a "Summer Miracles" program through which they bring over orphans from Colombia (in the past they've also brought over children from Russia and Taiwan) to families in the U.S. for summer, and occasionally winter, visits. During their visits, the children are hosted by families who are themselves interested in adopting older kids or advocate-families willing to host so that other U.S.-American families can meet the children. We hope to travel to Colombia and bring Jhonathan home by May. [UPDATE: Jhonathan's adoption was completed in June.]

I write more about my family's "Adoption Story" at my blog, Perfect Summer for a Miracle. 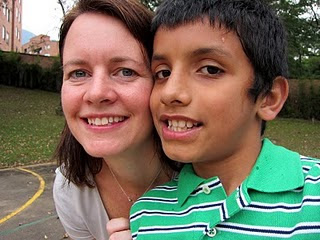 All three of my poems below were inspired by my experiences with Jhonatan. When I first read about the hay(na)ku poetic form, Jhonathan's phrase "Tengo hungry" popped into my head. I had been thinking about how I love when Jhonatan says that, and while I am so excited about his desire and determination to learn English...I will miss his Spanglishisms as they disappear. The "Departure" resulted from his winter visit to our family through Kidsave. Its image had been in my head but I hadn't written it down because when I tried, it seemed cheesy; but putting it in the hay(na)ku form preserves the memory for me to share with Jhonatan without being overly sappy. "Pillow Talk" came from hard-to-hear memories he only shared in the dark before bedtime.

The hay(na)ku is a 21st century diasporic poetic form invented by Eileen Tabios. Since its inauguration in 2003, the hay(na)ku swiftly became popular among contemporary poets around the world, such that it's inspired three anthologies (The First Hay(na)ku Anthology, The Hay(na)ku Anthology, Vol. II, and The Chained Hay(na)ku Project) and appeared in numerous poetry collections and literary journals. The basic hay(na)ku is a tercet with the first line being one word, the second line being two words, and the third line being three words. Poets not only write in the basic form but in a number of variations, including the hay(na)ku sequence (such as my "Departure" poem) that strings together more than one stanza.

Amanda Mason is from Hopewell, Virginia and lives in Frederick, Maryland. She attended the College of William and Mary, worked as a special education teacher for two years and have been a stay at home mom to her four daughters for 12 years. She loved to write when she was little but, since college, had mostly written sick notes, Christmas cards and the occasional blog post. Learning about the hay(na)ku poetic form inspired her to write the three poems above.

Amanda,
All good wishes for your upcoming trip to pick up Jhonathan!
best,
Eileen