WHAT IS (PART OF) YOUR ADOPTION EXPERIENCE?

It started with an anonymous call in December 2010. The caller didn’t even say hello: “I say, ask that woman you live with who your mother is!” the venom landed in my ear. My heart beat fast, mad callers and call-centre marketers are the reason I don’t pick anonymous calls. And I still don't know why I answered that call. I laughed and asked who was calling. I mean what could be more ludicrous than for some random person to say that to me. Moreover, she spoke in seTswana—my first language is isiZulu. She repeated herself, then hung up. I was amused. Thought it was a wrong number. And I put it out of my mind.

What I didn’t know at the time was that my mother was also being harassed in the same, if not worse, manner.

I never gave that call much thought. I knew my mother, that woman loves me to death. This is the woman who still waits up for me when I've gone out at night. This is a woman who has drop-kicked shack doors in the rain in Alexandra when I was eight because she thought I was missing. This is the woman that screamed like a banshee at cops to release me when I was wrongfully arrested—and I heard, she tried to grab the cop's gun. I don’t want to imagine what would’ve happened had she gotten it...

I was sure that I knew her womb.

That night in January 2011, when my mother sat me down on her bed and dropped the bomb that I wasn’t her biological child was the world night of my life. I wasn’t my father’s biological child. Just like that I had been otherised. I was 29 years old when I found out that my parents had adopted me from my mother’s niece.

My parents were not my parents. My parents were my grandparents or at least according to Western customs they were great aunt and great uncle. My direct grandmother being my mother’s sister. My cousins were my aunts and uncles, my cousin being my biological mother. My nieces and nephews all became my cousins. Suddenly the relationships that I had with everyone in the family were different. I thought that meant I was her first born child but shockingly found out that I was her second child. Imagine the abandonment issues that gave me. See if I was the first born and she was a teenager then giving me up would make sense but how does a mother choose one child over the other? I hope to understand that some day.

(To avoid confusion, I will continue to refer to my parents as my parents and my biological mother as my cousin—that is how I grew up.)

See my parents have always had other people’s children in their care and often these people would return and rip these children away without a descent ‘thank you’.

I came from a stable house. I had both my parents. I had a strong sense of identity. And I was their blood. That is what I knew. And as an Africanist knowing my identity meant I was connected to my past (my ancestors). In 2007, I even changed my name to reflect this culture blood connection.

Here I am with a name that no longer fits. A culture that might’ve been different had I been wanted.

It hurts that I wasn’t wanted. 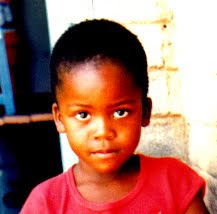 There’s a photo of me, I think I’m five years old. I’m standing on the stoep in our old KwaNdebele home, wearing a red t-shirt and blue shorts, I’m carrying a puppy we had named Bobby. Every time I look at this photo I can’t help but wonder “Who would look at that innocent cute face and not want this sweet child?” my mother, tells me all the time that I was a sweet child, talkative, a little naughty but a joy to have a round. I can’t help but wonder why my cousin, my biological mother, would see me at family events, visit my home and not want me back. I know that these questions only torture me; I’m still too angry to get answers from her. I don’t even trust that I will get honest answers.

She had her reasons, I'm sure. And did what she thought right at the time. I'm less bothered by the choice to give me up than the choices she continued to make through out the years. She knew me all my life and I knew her as my cousin. And in all these thirty years she never tried to have a relationship with me. I feel that even if I didn’t know that she was my biological mother, I would loved to have been close to her as a cousin. I could've had a better relationship with her and my nieces and nephew that turn out to be my siblings.

I think about the lost years, the relationships not built. I grew up in a home where my siblings were years older than me and my biological siblings are much closer. I think about how that’s affected my ability to relate to people. Now we have to rebuild the way we relate to each other.

Trust has been tainted. Identity now has to be reshaped, somewhat. Old relationships have to be built anew. I don't want anything to do with my cousin - I don’t trust her. I may change my mind in the next year or maybe never. I don’t know. I’m still trying to figure out who I am. And the one major lingering question is about my paternity.

I am thirty years old now. It really is a new era.

I still wonder if there’s someone out there that looks like me.

HOW HAS YOUR ADOPTION EXPERIENCE AFFECTED YOUR POETRY? / PLEASE SHARE A SAMPLE POEM(S) ADDRESSING (IN PART) ADOPTION:

For a while I couldn’t write. I struggled to make sense of what was going on but my poetry has become darker. I eventually started to write poetry again just to release the pressure in my head, in my chest. It hasn't lead me any understanding but it has made it easier to deal, it has lessened the tears.

There are some poems that I wrote a long time ago about my identity. I know look at those poems and though I can't question their authenticity I wonder what kind of poems I would've written if i had known earlier... I've written a lot about identity but there was always a confidence and lightness and ease to it. This is the first stanza of "Untitled #23," written in 2003...


*Mntungwa is my father's clan name, the name I took up in 2007 references this.
** These two lines are from the Mntungwa family praise poem (izibongo). In Zulu, and many other African cultures, these praise poems are part of the family's oral history. it is important to know the family izibongo and to pass them on to your children. Ones identity is embedded within these poems.

My poetry has become full of questions. Wondering. Wanting. My fears have become even more palpable and the only way to release—so that I don't feel like death is the only release—is to write. I have a number of unfinished poems and I think they shed a light to how I am now. I'm unfinished and I'm just trying to figure out what all this means.

3. something (let misery in)

My post-discovery work is full of 'spilt milk'. I don't like that space.

was trying to remember

While I will continue to write about this, I realise that at some point I have to confront everything and everyone. Finding my sanity is priority.

I am Duduzile—I have comforted and brought joy to my mother. I am/was Zamantungwa—my ancestors have adopted and looked after me thus far and they will continue to do so. Right now I can’t use this name. I am/was Mabaso’s daughter—this family chose me and they don’t want to lose me. Part of my journey now is about resolving my identity crisis.

duduzile mabaso is a writer, poet, publisher and designer. She publishes poetry at www.poetrypotion.com, and blogs about black women identities and politics at www.aintiwoman.com. “I’m pursuing a life out of bounds.”