My experience with adoption was not that of a naive teenager. I was 27 when I became pregnant, while seeking to open myself out to new people and new ways of life, and to stop war in Viet Nam, during the late-1960s antiwar movement in Berkeley, California. This was a time of hope and change, and there was no shame to being pregnant--to the contrary, though there was fear, of course, to be pregnant and alone.

I came to great new self-esteem in recognition of my love for others, in this time, and the loves and hopes of those days are now twined in my soul. But I did not yet understand that a woman alone can indeed raise her child, and, believing this for his sake, gave my child for adoption by--this, so many of us believed--a couple who would be nearly perfect parents.

And then to go on, "as if." Just like the Movement's "as if"---to make a better world by acting as if this is present and possible.

Only, he wasn't with me.

But he was out there.

Many years later, I had another child, and raised him on my own.

And many years after that, on the cusp of another war (this time, on Iraq--the first such war), the agency sent a letter--rather vague and formal--noting I had, when he was 18, sent a letter indicating I would be interested to meet him if he came searching. Enclosed with their note was a "waiver form" and explanation "waiver forms signed and notarized by each party is necessary before identifying information can. . ." There was no statement as to why they were writing at this moment.

So I went all over town searching for a notary, signed and got notarized the form, mailed it, and waited. And after that, piece by piece, the colors came back into my world. And he did, my first son.

And he was, and is, whole---intelligent, sensitive, empathetic, and achieving what he seeks in love and in his work. Responsive and a joy. For him, the adoption experience had worked---has worked wonderfully. (This does not mean I'd support a woman giving up her child; I usually would not; but I do think sometimes it can work well.)

HOW HAS YOUR ADOPTION EXPERIENCE AFFECTED YOUR POETRY?

For the first weeks of our reunion, I could not do poetry, I could barely speak, I could barely listen to music, I was--and my son was--in a state of love and vulnerability, and gratitude, thankfulness, beyond words, beyond joy. Slowly music came back, and then words. I wrote a poem to him, a poem I've shared only with him. Slowly I began to write other poems again; these were, for the first year or two of reunion, only about him. I published some of these, in Chain of Life, in the Touched by Adoption anthology, in NeoVictorian/Cochlea, and so on. And I wrote a soon-award-winning, multi-published essay, "God's Eyes," of those years of the Movement and giving up my son, that I needed to write (it's on www.highlightscommunications.com --go to the "writings" page and then to "essay"). Now there have been many years of reunion, and I write of many other things, but our reunion stays, often, in my works, whether poetry or prose. My new, debut novel, The Rescuer's Path (Plain View Press, 2012), though in the first half the tale of love between a Holocaust survivor's daughter and a fugitive, half-Arab antiwar activist, tells in the second part of their birth-daughter's search and eventual reunion. 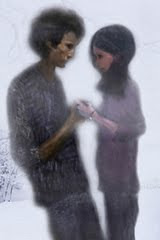 The image that is the frontispiece for Paula Friedman's new novel, The Rescuer's Path -- in this image, the young, slightly pregnant woman is based on a photo of Paula when she was young.


“Dark pool of night, black”
noir
in France swamped by old sorrow
I did not understand
This emptiness drained unexplained
tears tantrum grey as exile years
Parisian murs
from rue to rue, still clinging to
some old love
cramped, unfilling
as the carps’ dulled milling,
cold, in Fontainebleu’s
stone pools.

The empty well
too deep to peek
though I knew, carrying you
pale clearest blue,
there in the heart of the soul
reaching to
the mothering love
for everyone, from every one “but first
a man, and only then a child”;
I did not understand

until again I held you,

whom the waters seek,
the emptied womb.

“and when there’s dancing in the streets”
I wrote, beneath the silkshot god’s-eye glowing
in the early East Bay sunlight, 1968,
“then yes, / O people people! I’ll be there,
I’ll be there, on my wooden heart,
though you are gone”—for I had
lost my love and sought him
while the watchmen at the gates
of Selma, Stop the Draft Week, Port Chicago,
Oakland, Peoples Park, Empiyryr
smote me; I had sought
new ways of lovin’
(too soon /gone);
meanwhile, in Vietnam
the people died and
We must save them, heart cried
Save them, Save them, and for lovin’
I found new
and gave new and
oh-baby oh my baby
—my own baby,
gave him, gave you,
Oh I gave him, gave my baby
love,
away.

Gone the years,
gone the moment next
he found me, this son grown,
so early jay-song spring

Next, years,
years further
On to autumn, one November
dark with evening,
and my second son, long-distance,
hiking down ol’ Berkeley, cellphoned
“Mom—hey Mom,
hey Mom, there’s people out here watching on TV,”
says, “the election,” says
“some man is making a speech.”
“Who?”
“Uh. . .McCain.”
“He’s giving up?” I stood, receiver to
my ear, here on the fourth, fifth
step upon my little cabin’s handbuilt stairs,
quite shaky, out in Oregon;
“Mom? he’s conceding.” And we
laughed laughed laughed,
behind his cellphone hearing
cheers cheers cheers.
And when I told my older son,
my birthson, baby the beloved
of my heart,
“Oh yes it’s real,” he posted
from the Mission District, sent a digi-film; I see
the people drumming, strumming, listen to
the “Ó-ba-ma,” the “Ó-ba-ma”
of new hopes, channeled but
the emperor’s toppling, ph’raoh gone down
beneath our risin’ wave, the last the first
(—march on
/your creaking knees /to see
at last to see—)

But is it real?
Look at the real,
no movie now—you see, we knew it then,
already then, must make a revolution on our own it won’t
be handed to us—we must
occupy our own births, love’s birth
every time, O people
people, dancing in the streets

Paula Friedman is the reunited birthmother of one son and the once-Welfare mother of a second son. A published novelist, short-story author, and poet, she has received Pushcart Prize nominations, New Millenium Writing, Red/Green Press, Oregon State Poetry Association, Indigo Press, and other awards and honors, and Soapstone and Centrum residencies/fellowships. She has been actiive on adoption reform issues since her first son found her in 1991. Her new novel, The Rescuer's Path (Plain View Press, 2012), is a political love story of a Holocaust survivor's daughter who, in 1971, aids a wounded half-Syrian accused in a lethal truck-bombing; it tells of their birth daughter's 2001 search for the truth of her origins, and of the mother and daughter's reunion in the shadows of 9-11.