My adoption experience: When I was in 6th grade, my suburban Connecticut family adopted my sister from Seoul. Named after an Irish nun in the family, my sister was meant to be a docile violinist (forgiven: the Oriental stereotypes of Reagan/Bush-era CT suburbs). Instead, my sister bloomed into the jock my father always wanted-- the first Asian-American 5ft-2 captain of her high school's varsity basketball team. And on and on, a ferocious and graceful and passionate field hockey and lacrosse star. If the house were burning down, and I could save just one person, it would be and always would be my sister. I will always love her the most.

Furthermore, as a gay man who dreams of being a parent but who at the moment is not, I console myself often in thinking--given the eleven-year age difference--that I have in some sense been a parent. I raised my sister as much as my parents did. I changed her diapers, cozened her into sleep, was the one who weaned her of pacifiers. Mine was the lap to which she ran, in footage of her earliest birthdays. 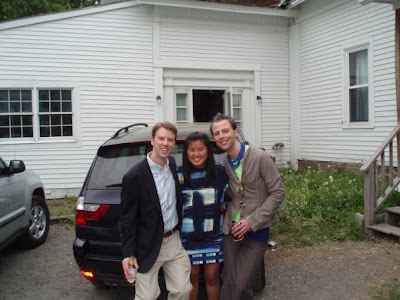 Michael, his twin brother and their sister

More recently, I've grown very close to someone with an 11-yr old boy adopted from Vietnam. Sharing in this boy's life has been a great gift, even if I wasn't from outset a part of the adoption process, per se. Through loving this awesome kid, I've learned new, more subtle thresholds of adoption--that as a gay man without children of my own, I nonetheless could sit on the carpet with Legos, fight Nerf Wars, etcetera. Such experiences further persuade me that adoption, even in its threshold states, might exist beyond the juridical. I've never adopted a child, but the adopted children in my life are no less buoying and inspiring.

Beyond which, as changeling queer black sheep in aforementioned CT suburb, I grew up with the ambient sense from others that surely I must have been adopted, how else to explain my own differences from everyone else. I was not adopted. I love my parents very much. But all the same, the idea of having been adopted, as ersatz mythology, informed, if not my own sense of childhood, other persons' sense of my childhood.

Adoption--as both thematic and methodology--has affected my poetry for some time. Recently, children of all sorts (including a post-kidnapped Lindbergh baby) have appeared in my poems, and I imagine the poems themselves as adoptively nurturing these lyric persons. In the spirit of Henry James's NY Editions--James's loving relation to his own earlier self--many of my own poems feel like they bear an adoptive relation to earlier versions of myself. In terms of method, I've long been enchanted by Joseph Cornell's shadowboxes, which adopt and nurture and protect objects not his own, per se. My own poetry's trawling often follows this errant, bricoleur spirit; which is to say that adoption itself becomes a metaphor for loving what becomes one's own, troubling what might otherwise count as what originally, naturally, had been one's own.

First seen
the wickerwork, ajour-veiled,
and then the boy,

the woman
of oracles, redblue,

insisting here
would be a pagody,

some temple
built from what already

in a stream
of orchard.

We found the boy,
which meant

we loved him,
this temple

and there we found
our twinkling boy,

who laughs before
laughing,

for
our dear life. Impish

and resilient beyond
all knowing;

let me
be on Perfume river.

Raise a shrine
as wished

before
our good-luck lady

Years later and before,
we’ll find

wade
unjaded waters,
the drift,
and the pagoda,

cradle for
the cradle rocking.

Michael D Snediker teaches American Literature and Poetics at Queen's University, Kingston ON. He is the author of Queer Optimism: Lyric Personhood & Other Felicitous Persuasions. His first chapbook, Nervous Pastoral, was published by dove|tail books. His second chapbook, Bourdon, is forthcoming from White Rabbit Press. He was the 2006 James Merrill Writer-in-Residence. His poems have appeared in venues including BLIP, Crazyhorse, Jubilat, the Paris Review, and Pleiades. He hopes his sister won't be embarrassed if she comes across this website. He hopes his brother and sister will forgive him for posting a photo of them online~~