For anyone on the adoption triad—birth parents, adoptive parents, or adoptee—the experience is a defining one. In my own case, the story gets a little complicated.

Here are the bare bones. My birth mother Elaine, already a mother and not yet divorced from her first husband, conceived a child with my birth father Don: my sister Kim. Unwilling to relinquish their daughter or the hope they’d one day raise her, the couple placed her with Don’s mother Elfie and her husband; the fiction presented to the world was that Kim (now “Evelyn” or “Schatzi”) was Don’s much-younger sister, though the story didn’t ring true to all who heard it.

With New York’s divorce laws very rigid (it was the late 1950s), Elaine and her not-yet-ex continued to live apart while Elaine raised his son, my half-brother Lance. Since she was technically still married, proof of adultery might have put his custody at risk, so when Elaine became pregnant again less than a year after Kim’s birth, I was placed with Betty, Elaine’s much-older half-sister, and her husband Carmine. They were the couple I knew as my parents till, at thirteen, at Don and Elaine’s urging, I was told of my adoption.

In 1959, Betty had taken a trip to Poland to meet relatives behind what was called the “Iron Curtain”; that’s how I became the Polish infant Betty brought back to America to complete the childless home she shared with Carmine.

In the early ’60s, when Elaine was finally divorced, my sister and I retained the same identities we’d known. Who were we after we learned the truth? It’s the question of a lifetime.

Later, Don and Elaine married and raised two sons together: my brothers Shawn and Dean, both unaware of their secret siblings. Oddly, neither of my birth parents believe I was adopted: because they placed me with relatives and never finalized the legal work, they continued to believe they’d never really relinquished me, even though I was raised as Betty and Carmine’s son.

Under any conditions, relinquishment is hard, and I have a great deal of compassion for Elaine and Don’s position. But it’s difficult as well to live without clear legal status, which increased the tensions between all three households.

Ned with his new cat Wyatt 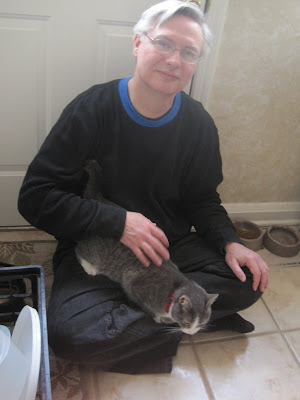 My adoption experience has made me keenly aware of how alternate lives may shadow our own—how hope, desire, and chance shape who we are. Kim and I lived in the same town and attended the same schools—in fact, we were in the same third and fifth grade classes—but by the time we learned we were siblings, we’d missed our childhood together. Today, my siblings and I live too far apart to connect closely as adults, and that, too, I regret. The sisters, Betty and Elaine, had it particularly hard, faced with a culture that treated infertility, unwed pregnancy, and divorce as scandals of near-equal magnitude.

Yet adoption also provided Betty and Carmine with a son, and Elaine and Don remain together to this day. The complexity of the narrative makes its telling a real challenge, but telling is, I think, essential: it’s a way to preserve memory of the living and dead, to lend some meaning to their lives, and to give thanks for the good fortune of having been raised by loving parents.

Adoption creates families, however unorthodox the road, and we are all part of the greater human family.

“Wait here.” You strode across the lawn, black salt-
And-pepper hair, black skirt, your high-heeled shoes
Stabbing the grass while I sat at the fence,
Split-rail beneath the maple. “Anyone home?”
You called out once again, as if by circling
Round the yard, weaving through shrub and rose-
Beds, tapping windows, you’d make them appear.
The sun beat down. This house would soon be ours
And so much would be solved when we moved in—
Old neighbors you’d pulled close too suddenly,
The long feuds afterward—all these erased
When we moved “one last time”: a new start, maybe,
One more second chance...You passed the sign
Staked on the lawn, snapping aside a branch,
White birch left to grow wild, then disappeared
Around the house, dirt-brown split-level ranch
Two blocks from your new friend. And who was she,
“Aunt” Elfie, who’d scouted out this house for sale—
Mother of Schatzi, freshly dyed flame-hair—
Pouring herself the drinks that you refused?
All night, shaking ourselves to rock ’n’ roll,
Her daughter and I danced to old 45s
Down in that paneled basement while the men
Laughed over shots of whiskey, needle scraping
When we thumped too hard... Where were you now?
A bird, black silhouette, veered toward the power
Lines, grabbed hold of the clumped knot stretching toward
A stripped pole near the woods. A motor gunned,
And in the distance children’s—strangers’—cries.
I didn’t want to move, and yet I did—
If you were right, this time...I liked the daughter—
What would I have noticed? How she laughed
In shrieks, almost; how long you’d watched us both,
Till on the drive home you’d leaned close to say,
Quietly, to my father, it was good—
Good that we’d know each other growing up.
What could you mean? I pushed the thought away—
But on that day, mid-June, trapped in a yard
Flooded with light, breaking apart the seeds
That fluttered down, I heard your voice again
Greeting the car. You clasped the owner’s hands
As she emerged, caught off-guard while the door
Thumped shut, her husband from the driver’s side
Crossing to greet you as she stepped away
Stiffly. The closing loomed; more paperwork,
But why had we come really? To see friends—
Strangers we hardly knew—who’d disappear,
The deal complete, into their separate lives
As anyone but you would understand,
Smiling too widely, talking through their nods
And curt replies, praising your new best friend,
Her daughter, all the luck that brought you here,
Certain at last you’d find yourself betrayed
No longer, that you’d fled the past for good
Here in a world remade. You called my name—
But what if you were right?—and I obeyed.

Sister, when you blew smoke against the glass,
I looked up at the school bus, stood below
In snow. For months you knew whose son I was,

Whose daughter you were. A block away, your house,
Grandparents who'd raised you, waited. Crunching snow,
The bus moved on. You blew smoke on the glass.

Red stoplights flashed, brakes groaned again. Your voice
Carried as you stepped off. Don’t look back now—
For months before I knew whose son I was,

We'd pass in the halls then look away. I guess
When told, you thought, It's better not to know.
I watched. Laughing, you'd blown smoke on the glass

While I imagined other lives for us,
Those missing years. If I'd been raised with you—
All gone. I thought I'd known whose son I was,

But now...Too late. You’d passed from view. The bus
Scattered exhaust on snow heaped by the plow.
How much was lost, like breath against cold glass...
You tried hard to forget whose son I was.

Ned Balbo’s two adoption-related books are The Trials of Edgar Poe and Other Poems (Story Line Press/WCU Poetry Center), awarded the 2010 Donald Justice Prize by judge A.E. Stallings, and Galileo’s Banquet (WWPH, 1998), awarded the Towson University Prize for Literature. His second book, Lives of the Sleepers (U. of Notre Dame Press, 2005), received the Ernest Sandeen Poetry Prize and a ForeWord Book of the Year Award. An essay, “Walt Whitman’s Finches: on discretion and disclosure in autobiography and adoption,” received Crab Orchard Review’s John Guyon Literary Nonfiction Prize. “My Father’s Music,” an essay on adoptive identity and ethnicity, was a finalist for the Pirate’s Alley Faulkner Society award and appeared in Our Roots Are Deep with Passion: Creative Nonfiction collects new essays by Italian-American writers (Other Press, 2006). A chapbook, Something Must Happen, appeared from Finishing Line Press in 2009. He teaches at Loyola University Maryland.