The quick answer: I am an adopted Korean. I was born in Daejeon, South Korea in December 1970 and adopted at ten months of age. I arrived in San Francisco, California, where my parents lived. I was plump and shocked. I am also a brother to an adopted sister. She is a year and a half older than me, and she was born in California’s East Bay Area. She is beautiful. We are very close to this day. Lastly, I am an adoptive parent. My daughter—my most remarkable joy—was born in China and adopted at ten months of age. I am private with the details of her experience, so my comments here will elaborate on my experience. 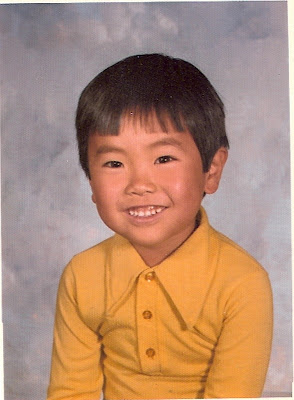 The longer answer—adoption is a part of every aspect of my life, although I do not think of it every day by any means. Growing up in a Caucasian family in a predominantly Caucasian culture, I had to make sense of the unavoidable societal and institutional problem of racism. This was difficult, and while it does not inform the majority of my experiences in youth (or as an adult working in higher education), it would be significant if adoptive parents understood this—not the exact effects of racism, per se—but that it is part of the Korean adoptee’s reality. I also understand now that when I write about adoption, I write about trauma. Yes, I write too of beauty. But this is about trauma. One has to dig for a while through some tunnels before that light appears. But it does.

I was a happy little kid with a bit of a temper. My early years were filled with Star Wars, baseball cards, and hours and hours playing soccer. I had very little understanding of Korea as a child. In college—that world where so much good can occur—I read my first Korean novella, Kang Sok-Kyong’s A Room with a View. This opened a new world of possibility for me—the Korean part of me—and I began to piece it (back) together, book my book, poem by poem. I returned to Korea for the first time when I was 31. I went back again, seven years later in 2008. Being in Korea felt like coming full circle. Some poems cannot contain emotions so expansive. What can? Perhaps close friends and family? So perhaps my experience is just another circle – how I notice here in the United States when there are Koreans around me or when my beautiful Korean adoptee friends and I gather for a Hite or noraebang or barbecue, how my laugh echoes my father’s, how my daughter giggles when I make a certain face, or how she pretended to grab the moon one day when she was three years old and then pretended to hand it to me, saying “Here Daddy, the moon is for you.”

At times, the subconscious surfaces so immediately that even the most concerted effort to dismiss it will not do. In these instances, my adoption experience is the entire impetus and subject of the poem. For example, in This Many Miles from Desire, there are about six poems with “Korean adoptee” in the title. A few others, such as “Salvation,” are about my adoption, birth family or birth mother concerns. For the majority of the poems I have written and continue to write (even in my second book manuscript, Gardening Secrets of the Dead), however, my adoption experience is a secondary concern at best, since other concerns drive the poem’s impetus, drafting, vision, and re-visioning. These concerns include the accuracy of sound and rhythm, clarity of image, precision and pace and imagination with the line and language, and of course, some element of surprise.

On a certain level, my adoption from Korea involves aspects of war and dissent, separation and reunification, love for family, economics and erasure. Voice and silence. Desire. Questions and acceptance of answers and the absence of them. So it follows that in my poetry there are very few chronologically driven, linear narratives. I do not have the life experience to sustain poems like that for very long. I have, I should say, had a very good life, for lack of a better term, but my poems reflect the aspects I mentioned earlier. Thematically, then, the poems illustrate these experiences, but even within a poem that has little to do with adoption overtly, there are tensions of silence or pause, images of women and the known and unknown, and the use and usefulness of questions. I have only recently begun to realize this.


The blues is what mothers do not tell their sons,
in church or otherwise, how their bodies forgave
them when their spirits gave in, how you salvage love
by praying for something acoustic, something clean

and simple like the ideal room, one with a shelf
with your three favorite books and a photo
from your childhood, the one of you with the
big grin before you knew about the blues.

I wonder what songs my birth mother sang in
the five months she fed me before she left me
on the steps of a church in South Korea.
I wonder if they sounded like Sarah Chang’s

quivering bow, that deep chant of a mother
saying goodbye to her son. Who can really say?
Sometimes all we have is the blues. The blues means
finding a song in the abandonment, one

you can sing in the middle of the night when
you remember that your Korean name, Kwang Soo
Lee, means bright light, something that can illuminate
or shine, like tears, little drops of liquefied God,

glistening down your brown face. I wonder
what songs my birth mother sings and if she sings
them for me, what stories her body might tell.
I have come to believe that the blues is the body’s

salvation, a chorus of scars to remind you
that you are here, not where you feared you would be,
but here, flawed, angelic, and full of light.
I believe that the blues is the spirit’s wreckage,

examined and damaged but whole again, more full
and prepared than it’s ever been, quiet and still,
just as it was always meant to be.


GARDENING SECRETS OF THE DEAD


When the light pivots, hum—not so loud
the basil will know, but enough
to water it with your breath.
Gardening has nothing to do with names
like lily or daisy. It is about verbs like uproot,
traverse, hush. We can say it has aspects of memory
and prayer, but mostly it is about refraction and absence,
the dead long gone when the plant goes in. A part of the body.
Water and movement, attention and dirt.

Once, I swam off the coast of Belize and pulled
seven local kids along in the shallow Caribbean,
their brown bodies in the blue water behind me,
the first one holding my left hand like a root,
the last one dangling his arm under the water
like a lavender twig or a flag in light wind.
A dead woman told me: Gardening,
simply, is laughing and swimming
a chorus of little brown miracles
in water so clear you can see yourself
and your own brown hands becoming clean.

Lee Herrick (birth name Lee Kwang Soo) was born in Daejeon, Korea in 1970 and adopted at ten months old. He is the author of This Many Miles from Desire (WordTech Editions, 2007) and has recently completed his second book manuscript, Gardening Secrets of the Dead. His poems have been published in ZYZZYVA, Many Mountains Moving, Berkeley Poetry Review, and The Bloomsbury Review, among others, and in anthologies such Highway 99: A Literary Journey through California’s Great Central Valley, 2nd Edition, Hurricane Blues: Poems About Katrina and Rita, Seeds from a Silent Tree: Writings by Korean Adoptees, and The Place That Inhabits Us: Poems from the San Francisco Bay Watershed. He is the editor of New Truths: Writing in the 21st Century by Korean Adoptees, published by Asian American Poetry and Writing. He teaches at Fresno City College in Fresno, Calfiornia.

Beautiful. I have always loved your poetry. Absolutely beautiful.

As always, your words are rich and personal, evocative expressions of this ‘in-between’ place where you live, informed so very much by your families, your mileage. I sometimes forget these places can survive in twenty-first century air, shifting places less about distance as perspective and yes, trauma. I wish you the best with your work and continued circles there and back again.